How can we help?

Our People Make The Difference

Our most valuable asset is the team that puts in so much hard work. The investment and innovation only bear fruit when those implementing and maintaining our high standards are of exceptionally high calibre also. 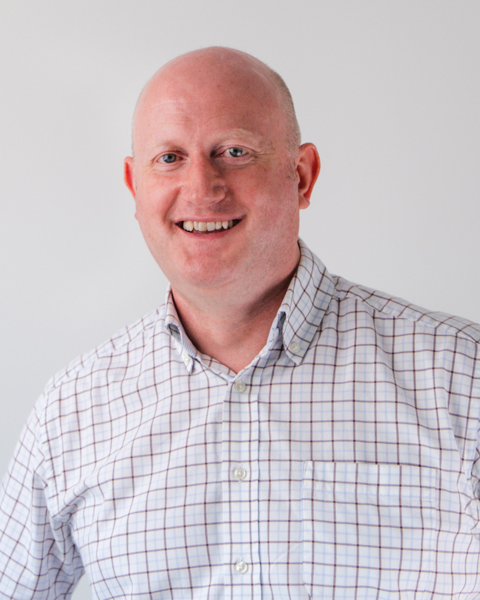 As Managing Director, Mark heads up the whole organisation and oversees all aspects of our operation on behalf of our parent company H.L Hutchinson Ltd. Mark joined Produce Packaging in 1998 and has steered the company to year-on-year growth for over 20 years. From a small box manufacturing operation in a shed in a quiet Kent village, to the four UK depots that we now operate it has been quite a journey and Mark has guided Produce Packaging every step of the way. His local rugby club also gets the benefit of this guidance as an M&J’s Coach and when not there, the sea beckons for family R’n’R. 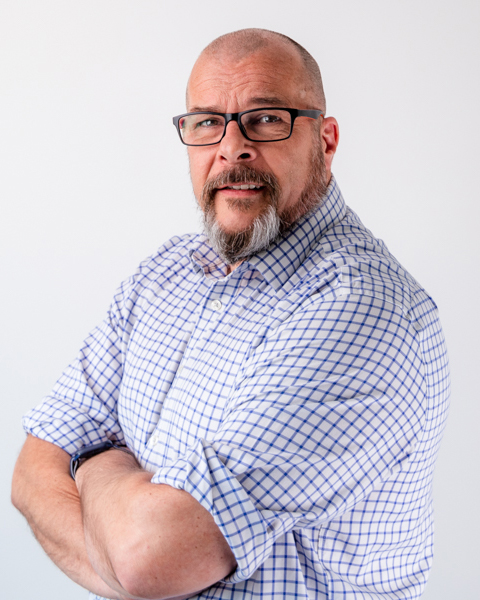 Jez joined the company in January 2003 and became just the third member of the team. After nurturing substantial growth in London and the SE, nearly 20 years later, in addition to his role in the senior management team, helping the MD to steer the business, today Jez is responsible for various facets of Produce Packaging including sales, marketing, advertising, social media, website (including this modest write up), NPD, NMD, systems development and BBQ’s. Outside the business his passions are for travel on his motorbikes and restoring / recycling objects that might otherwise be lost to time. But mostly his motorbikes. 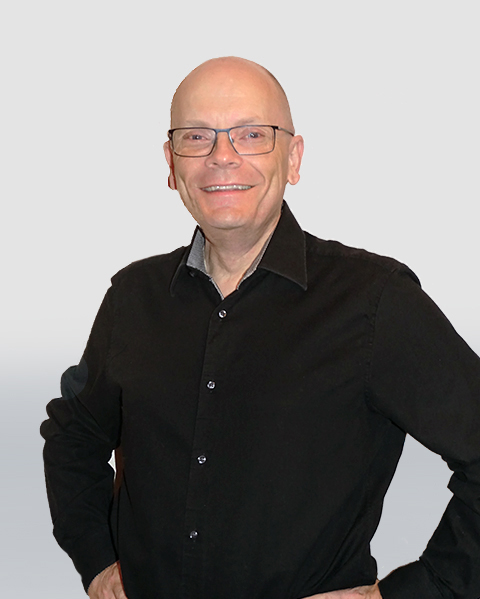 Mark (aka Harry) joined Produce Packaging in 2000 to establish the business north of London. Following substantial growth across the country over a 12 year period, Mark became our Commercial Manager and a member of the Senior Management team steering the business forward. Working closely with the sales team and an oversight of the buying team, Mark is focussed on the general profitability of the company. He also manages our compliance ensuring Produce Packaging maintains a high rated BRCGS accreditation across all our sites. In conjunction with our parent company, Mark is deeply involved with the continued development of our ERP systems. Travel is Marks passion, and he loves to see new places and experience other cultures. He will always visit somewhere new given any opportunity! 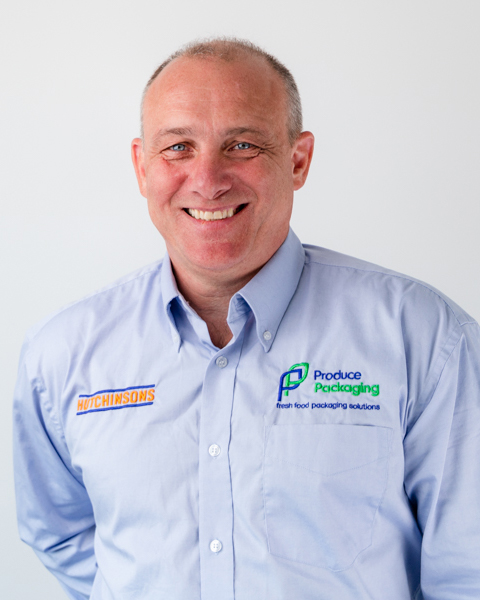 David joined the business in 2022 to oversee the operational scope of our nationwide venture. He brings a broad range of operational experience gained from the construction and financial service industries. As Produce Packaging has grown year on year, so have the number of team members, facilities and fleet that combine to offer the service and services that our customers enjoy. With four depots strategically located around the UK, David not only ensures the smooth running of our daily operations but is also constantly looking ahead for improvement and efficiency, all of which benefit both ourselves and our growing client base. A keen sportsman, David is especially happy when rugby is involved. A stalwart and regular player at his local club, David is particularly proud to have taken the field alongside his two sons several times. 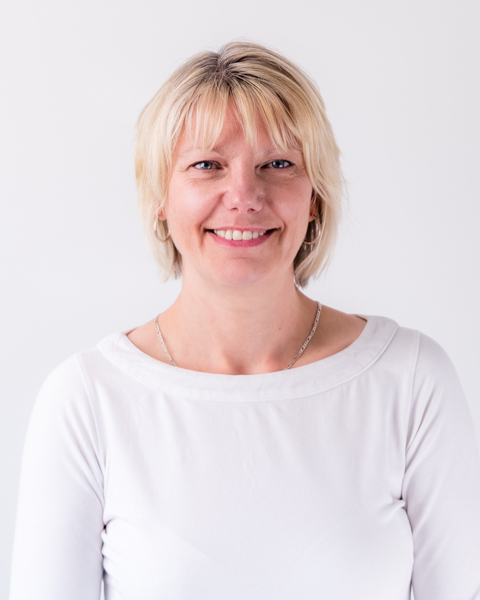 Joining us in 2013 Denise has been an excellent addition to the team. With a long and distinguished resume within the fruit industry, Denise brings a wealth of experience with her. Managing all aspects of buying for Produce Packaging, Denise has restructured its operation and broadened its remit. From discovery to delivery, the buying team are responsible for ensuring that we have everything that we need, when and where we need it. Denise is kept busy when not at work by her love for her two horses. Still “mucking in” with the daily chores (largely mucking out) Denise is happiest when out hacking around the Kent countryside. 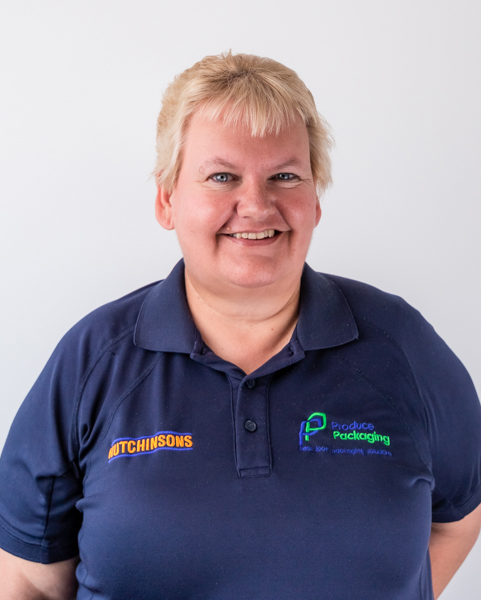 We were very lucky to have Lorraine join us in 2018 as our Customer Services Manager. However, due to tiny issues like Brexit, Lorraines role rapidly became embroiled in the chaos of new customs rules and procedures that followed. Produce Packaging has been most fortunate that Lorraine has been able to steer us through that particular storm. As we continue to grow our team, Lorraine will be passing that chalice to others and now give 100% to a role she already excelled in. Lorraine enjoys her holidays, with cruises being favourite and sorely missed over the last couple of years! 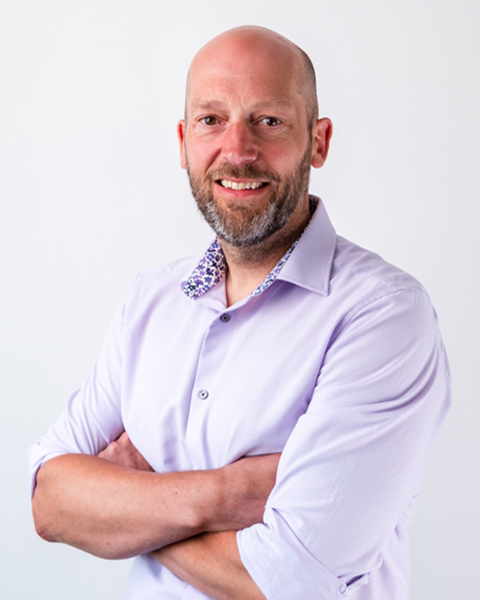 Mark has been with Produce Packaging since 2012. Covering what could loosely be called, the East of England, Mark has driven growth relentlessly through determination and outstanding customer service. Almost singlehandedly responsible for Produce Packaging currently doubling the size of the Spalding depot! When not working extremely hard for his customers, Mark can be found putting (literally) 100’s of miles under the wheels of his bike. Nothing Mark likes more than to start the day knowing that the rest of us are still trying to wake up whilst he attacks the scenery in a Tour-de-Lincolnshire fashion. 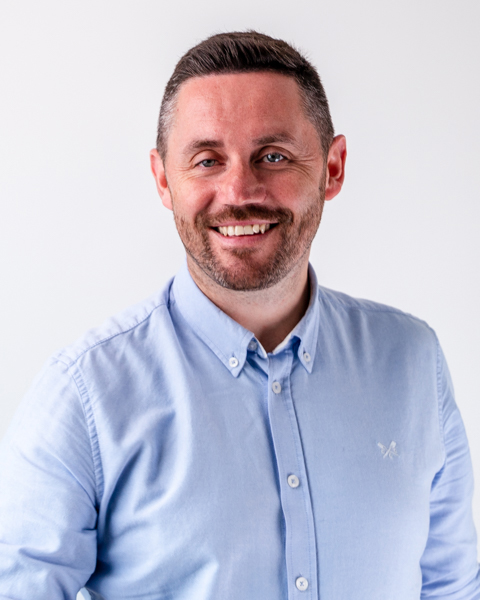 Lee joined Produce Packaging back in 2009. Having previously worked for a supplier of ours, when the opportunity arose Lee joined as we knew he would be an asset to the team. 13 years later, Lee has excelled following his move from customer service to sales. It would be fair to say that Lee has travelled a bit, having covered both Scotland and the South East simultaneously for a while! After excellent growth in Scotland, Lee now covers the South and London whilst also being our main liaison with our biggest supplier to keep the supply chain informed during what are always unpredictable seasons. Outside of work, Lee is a passionate sportsman and particularly about football. He also averages 3 stag do’s a year. His own fast approaching! 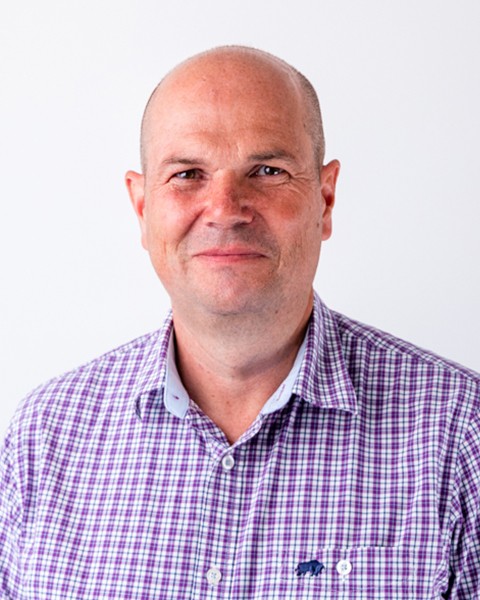 Darren came aboard in 2015 joining us to travel the highways of the West, Wales and Ireland. We didn’t have the biggest presence in the area back then and Darren has been growing the Produce Packaging profile and business ever since. Reaching from Lands End to Preston and across to Ireland it’s a fair territory and full of opportunity. Passionate about his two dogs and never one to sit still, Darren always has his eye on an outing, whether it be in the wilds with the hounds or sailing and instructing on the water. 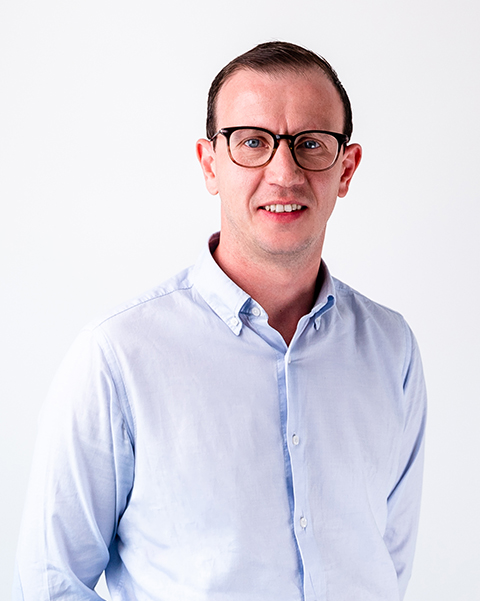 Kyle swung into action with us in 2021. Our first permanent sales appointment in Scotland has been a great success, taking our fledgling base and growing steadily since. Covering everything from Strawberries to Shellfish, Kyle has had to learn and adapt fast to a very varied customer base. His enthusiasm and drive will definitely prove invaluable. Most of the PP team like to get the golf bats out occasionally but Kyle is in a class of his own. Playing what seems like 3 times a week to us, he is definitely more than keen, but with the choice of courses on his doorstep, who can blame him? 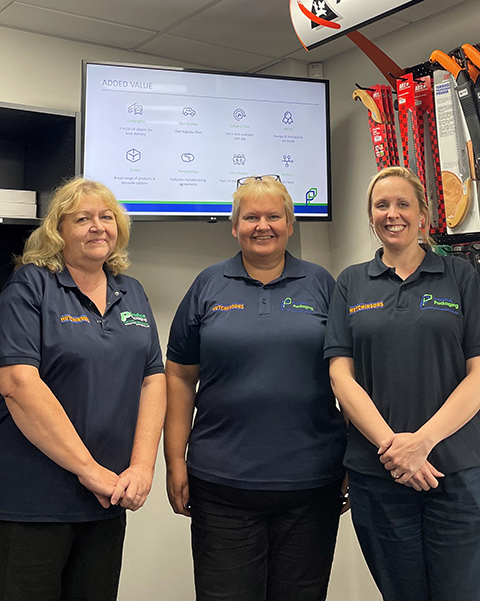 Sandra, Lorraine and Karen (L-R) are our dedicated Customer Services Team and they are always there when you need them! As the front line of our operation, if you have ever called Produce Packaging you will no doubt have spoken to one of our brilliant trio. From the receipt and processing of all of our orders to the questions and queries our clients have, they are dedicated to providing the highest service levels and all with a smile. You can even contact them via this website! Produce Packaging wouldn’t be the same without them. 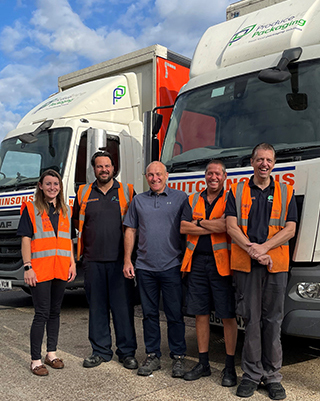 At our Marden H.Q.

At our Marden H.Q.

Managing the logistical needs of Produce Packaging is no simple task. Claire, Dan, David, Steve and Tony (L-R) our Marden Ops team, work tirelessly in combination with our teams in Spalding, Forfar and Ledbury to ensure the most efficient and timely use of our resources. Planning the storage of products about to arrive at PP through to their efficient delivery to our clients are the fundamentals but there is so much more. PP has a growing number of sleeper cabs and trailers that can be utilised not only for deliveries and transfers between sites, but also for collections from our manufacturing suppliers. The Ops teams ensure that we are using our infrastructure to reduce costs, maximise our efficiency and ultimately deliver the best service to our customers. 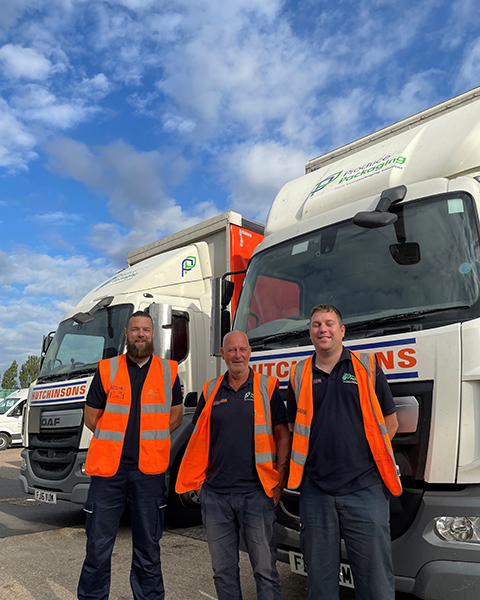 At Produce Packaging our drivers are often the frontline of the business as the only team that sees our customers every day come rain or shine! We currently have 14 drivers (+ trainees) across our 4 sites, delivering our most important service. Over the last 2 years we have committed to training our own HGV drivers due to the competition in the industry and it has proved to be a great decision. Utilising our growing fleet (that has everything from vans to 18T sleeper cabs + trailers) the job is different every day. It might be 1 box to a farm shop in rural Kent to 26 pallets to a food processing factory in Birmingham to a collection from one of our suppliers in Scotland and then the tramp home – what ever the task, our drivers are committed, professional and a cornerstone of our success. Pictured are Phil, Colin and Nathan from Marden (I don’t know who let John go on holiday!) a snapshot of our wider team across the country. 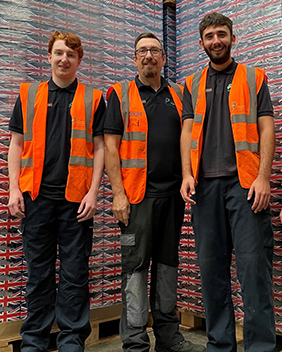 Joe, Jeff and Jacob (R-L) oversee our growing box business at our main facility in Kent. Over the last few years, this dedicated box erecting facility and our satellite site in Scotland have gone from strength to strength. From a standing start we have made and delivered over 3.8 million boxes and continue to add customers for both our standard and bespoke lines. With 4 state of the art machines in Kent and our newest machine in Scotland, we still have capacity to spare and we are looking forward to filling that up and expanding our capability further. From 1kg boxes for soft and stone fruit to 18kg boxes for top fruit, our stock lines cover most fresh produce needs. Our bespoke lines can enhance your produce marketing or cater for different market sectors and we can also arrange for the supply and installation of your own machinery. Keep  up the great work chaps.